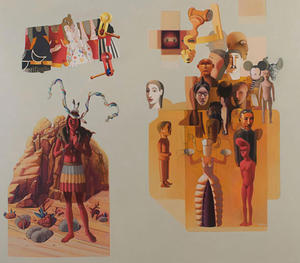 Change occurs when fun runs out and I was ready for big changes after the long period of revision of the three large Macumba oil paintings. A change of medium also seemed like a good idea so with an eye on the collaged based paintings of the 70's and 80's and a more idiosyncratic approach, I invested in a full set of acrylics and stretched some large canvases primed with an acrylic gesso. AR

The first stage of this work was very colourful with large areas of reds and yellows. The first image to appear was the Indian. I had used him in a small watercolour, working from a plaster figurine bought in a market in Rio. The Indian or Cobloco, appears to be a combination of native Brazilian and North American Indian.. certainly a symbol of freedom in a slave culture. He is usually presented carrying a deer carcass across his shoulders.

(In the painting, the reference for his background came much later from a DC western comic.)

As the work developed I began to mix other references from the market ..toys, childrens' carnival costumes, masks, along with ex voto heads and figures from the museum. My version of Yemanja is matched with a punk Barbie and a toy aesthetic prevails. The young priests head emerged as I painted a group of Ex Voto heads and became a likeness to a cousin who in a previous life was a Christian Brother .Br David.

Last Mission refers in part to a collage based installation by Ovind Fahlstrom 1966 Venice Biennale where painted comic cut-outs were presented, floating against a cream background.( Fahlstrom is an acknowledged early influence) The combination of large scale, fast drying paint and quick changes in images was a liberation after the endless revision of the previous works in oil.

I can see clear connections between the new paintings and the collage-based works from the 70's and 80's, without the rigidity of method on which the early works depend.