"Ze, St Jorge and his Dragon"

Two banners are presented, floating over the drama, one obscuring the other. Underneath the catholic motto reads Salve Regina Mater Misericordia. On the top, Nosso Senhor do Bonfim do Brasil. Our Lord of the Good End. Below, the drama unfolds. St. Jorge's lance skewers the man in the dragon suit, with copious spilling of blood. He alone is real and casts a shadow. Ze Pelintra, cool in his panama and white suit with red trimmings is the intermediary between us and the deity Ogum/ St Jorge. On the ground a shower of broken twigs, residue of a cosmic wind is also real and casts shadows.

"Pomba Gira, Queen of the Seven Crossroads and Ze"

Ze Pelintra appears almost floating in the shadows behind Pomba Gira. He is clearly subservient to a powerful deity in her "Wonder-Woman" costume, with skull topped sceptre and classical pose. She is not only the embodiment of female sexuality, she is female power beyond male control (a reference to contemporary female sexual confidence e.g. Beyonce) The seven crossroads (of life and death) are represented by models (in keeping with the visual language).

The effect is carried technically by control of focus, of hard and soft edges and subtlety in the low tonal values, an interplay of dark on light/light on dark.

As in the museum of Folklore, the figures emerge from darkness. 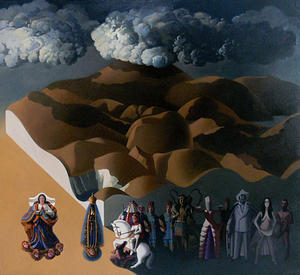 "Brasil, the Taste of Blood"

The cast of characters was increased from five to thirteen as part of a major revision in 2008/9. All three large macumba works were revised during that period and in the case of " Brasil " every element was repainted. The figures are read from left to right, light into darkness, from the Virgin Mary to Exu. They are set on a "stage" created by the model mountain scape with clouds.

Excerpt from "An Artist in The House of Miracles"

The paintings are intensely concentrated, each meticulously painted to catch the elusive idea out of which it arose. To 'realise' means to make and to know, and this is crucial to their focused power: making becomes knowing. The effort to make is the artists effort to uncover his own purposes, his relationship with his subject and, inevitably, with painting as an art. Behind the painted protagonists stand crude popular figurines, but the artist (following a trait in all his works), refines and perfects them, and so removes them from their material origins, liberating them as ideas, psychic entities, gatekeepers between light and dark. Technical deftness is essential to his re-imaging, not to pull tricks on the viewer but to unlock the inner life of these images that haunt his imagination. It enables the viewer to enter the game of art. They are not borrowings emptied by a change of continent or anthropological studies of another culture or even less are they commentaries on others religious beliefs. They are a response to an encounter that, being unable to shrug off, the artist has had no choice but to confront, to find meaning for him.

Spirits have the power to possess but so does the artist through the achieved image.