IMAGES FROM THE EXHIBITION 'A PAINTED WORLD'

SUSAN MANSFIELD in THE SCOTSMAN: 'A PAINTED WORLD'

HELEN BROWN in THE COURIER: 'A PAINTED WORLD'

SUSAN MANSFIELD in THE SCOTSMAN: 'A PAINTED WORLD' 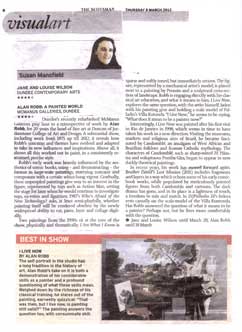 Dundee's recently refurbished McManus Galleries play host to a retrospective of work by Alan Robb, for 20 years the head of Fine art at Duncan of Jordanstone College of Art and Design. A substantial show, including work from 1975 up till 2012, it reveals how Robb's concerns and themes have evolved and adapted to take in new influences and inspirations. Above all, it shows all this worked out in paint, in a consistently restrained, precise style.

Robb's early work was heavily influenced by the aesthetics of comicbooks, using-and deconstructing - the format in large-scale paintings, marrying restraint and composure with a certain whizz-bang vigour. Gradually, these unpeopled paintings give way to an interest in the figure, represented by toys such as Action Man, setting the stage for later when he would continue to investigate toys, ex-votos and figurines. 1987's Who's Afraid of the New Technology? asks, at least semi-playfully, whether painting itself will be rendered obsolete by the newly widespread ability to cut, paste, layer and collage digitally.

Two paintings from the 1990s sit at the core of the show, physically and thematically. I Am What I Know is sparse and softly toned, but immediately serious. The figure, represented by a mechanical artist's model, is placed next to a painting by Poussin and a sculptural cross-section of landscape. Robb is engaging directly with his classical art education, and what it means to him. I Live Now, explores the same question, with the artist himself, laden with his painting gear and holding a scale model of Palladio's Villa Rotonda. "I Live Now," he seems to be saying "What does it mean to be a painter now?"

Interestingiy, I Live Now was painted after his first visit to Rio de Janeiro in 1998, which seems in time to have taken his work in a new direction. Visiting the museums, markets and religious sites of Brazil, he became fascinated by Candomble, an amalgam of West African and Brazilian folklore and Roman Catholic mythology. The characters of Candomble, such as sharp-suited Ze Pilantra and voluptuous Pomba Gira, began to appear in new darkly theatrical paintings.

In recent years, his work has moved forward again. Brother David's Last Mission (2011) includes fragments and layers in a way which echoes some of his early comic-book works, while populated by meticulously painted figures from both Candomble and cartoons. The dark drama has gone, and in its place is a lightness of touch, a freedom to mix and match. In Ze/Palladio Ze's fedora rests casually on the scale-model of the Villa Rontonda. Has Robb answered the question of what it means to be a painter? Perhaps not, but he lives more comfortably with the question.